Guess Who : Find the character I have in mind

Guess who game is a fun online games for kids. This game is so interesting and interactive, as it requires two players. Moreover, it has a huge impact on a child's cognitive development.

For instance, when kids begin to think critically, they often have the ability to predict, thereby having a high chance of accomplishing positive results at the end.

If you enjoyed this game, don't hesitate to find more funny games for kids here !

WHAT YOU NEED TO KNOW ABOUT GUESS WHO GAME

Considering the many characters on board in this game, you are expected to guess who : find the character I have in mind. This brings about much focus to kids, due to the guided questions asked about the physical appearance of each character.

It is very easy for kids to be engaged in the guess who game.

This is because every kid finds it very interesting, and wish to be enthralled in it. One reason is also because, kids find it very amusing to note people's physical appearances, especially those that are funny and abnormal. Indeed, the game guess who: find the character I have in mind has as much of abnormal physical appearances of characters as possible. This however is an obvious tip for kids to love to play the guess who game.

Example - find the character I have in mind

Wow! This is a very interesting and fun game that attracts every kid. YOU as a player is playing with the CPU ok.

There are a series of questions that will help you guess who its own character is. The steps below are going to guide you easily play this game;

Secondly, in order to guess who the CPU's character is, follow gradually the questions on the box below so as to predict and thus accomplish your task. One of such questions is;

[You select the above question by clicking on the tick besides the question box.] 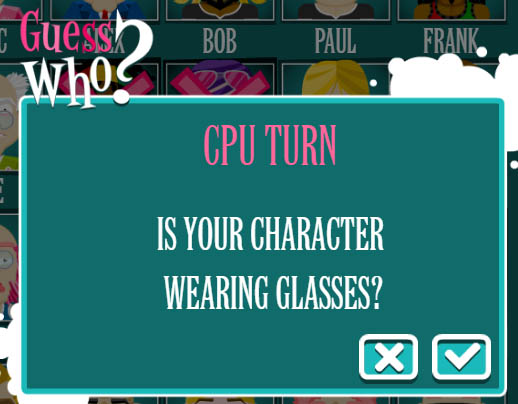 It's so simple, isn’t it? Since your character is visible to everyone, the truth needs to be told. If the correct answer to the question asked is YES, you click

[You need to be very smart at guessing which one is its character, if not it will answer all your questions before you. As such, you will be defeated.]

Wow! Its such an interesting, but challenging game. Thus, the more kids play, the more they become experts and will however be first to accomplish every given task.